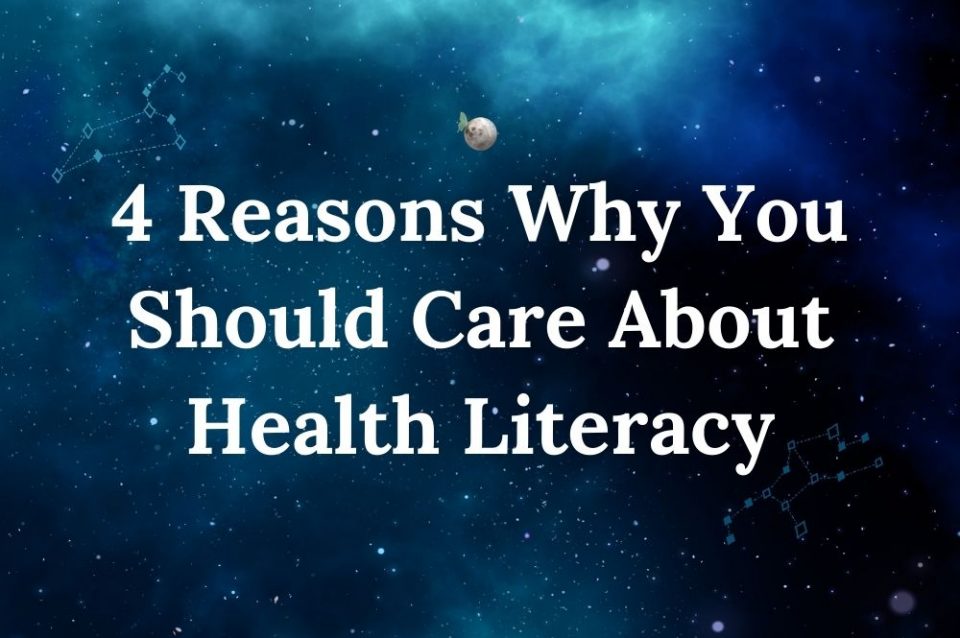 You likely understand the words listed below, right?

But can you understand this:

Under certain circumstances the within-cells and interaction sums of squares may be added together and divided by the combined degrees of freedom to obtain an estimate of the variance based on a larger number of degrees of freedom.

Disorienting, isn’t it? Would you feel comfortable making a life affecting decision based on your comprehension of what you just read?

Knowing how to read and understand individual words on their own is basic literacy, which, I assume, you have. But did you notice how quickly comprehension of individual words can fall apart once they were combined into a foreign concept? Did your eyes glaze over? I know mine did.

Just as you may have had some difficulty understanding that quote above, there are millions of American adults who struggle to understand their clinicians. Different topic, but same idea. Don’t believe me? Give me a moment to convince you.

There isn’t anyone alive who shouldn’t pay attention to their health. It isn’t an ignorance that can be afforded to the chronically ill, or even to the perfectly healthy. Even the most content and healthiest of shut-ins having no parents, friends, or significant others to worry over, will face the reality of it. Taking care of your health is a part of everyday life. No matter who you are.

And how do you do that you ask? By understanding health information as it is presented to you. And that may be more difficult than you think.

What I’m bringing up is different from mere basic literacy. Basic literacy is the ability to recognize words, read fluently, and involves comprehension skills. You, of course my dear reader, are more than capable in this regard. I’m focusing on something called health literacy. It’s just as important, and not having it could be deadly.

So what exactly is Health Literacy?

There are 4 domains of Health Literacy

Literacy, in general, is a huge problem, especially in the US

Testing for literacy in adults is something that started back in the early 1990’s. It began with the National Adult Literacy Survey or NALS in 1992. It involved about 1,000 adults 16 and older in each of 12 states as well as 1,100 inmates. 26,000 adults total. NALS was an at-home test where the person was given everyday materials to accomplish every tasks.

About 75% of adults in the lowest group and about 97% of those in group 2 did not perceive how bad their literacy was. When asked, they reported they were able to read and write English “well” or “very well”. To be fair, some factors that contributed to this were that nearly 62% of them didn’t finish high school, 19% had visual difficulties, and 25% were new to learning English. However, even with those factors taken into account, the results were damning.

After the NALS findings came out, government officials started to get nervous. We had to study how this effected our lives. How does this change a person’s sense of self? Does this affect whether or not people vote? What does this mean to the economy and the level of works skills necessary to succeed? And finally, how does this affect people’s health?

And just like that, Health Literacy came into focus

In 1995, 3 years after the first NALS, the TOFHLA, or Functional Health Literacy in Adults, survey was conducted. It was developed using actual hospital materials and was done in 2 large public hospitals with about 400 participants. Consisting of 200 English speaking and 200 Spanish speaking adults, the findings were grim. 35% of the English speaking and 62% of the Spanish speaking patients had “inadequate or marginal functional health literacy”. Note that the materials were in the preferred language for all involved, so language was not a barrier.

Other findings of the TOFHLA:

So…have I convinced you yet?

You may be asking yourself how this is possible. I assure you, all I stated is true. And not only is it true, but based on this research you have met people who struggle with literacy. 67% of the TOFHLA patients did not admit to having difficulty with reading. Of those who did, 40% were ashamed to admit it to the researchers. The majority of them had not even told their spouses or family about it.

If you happen to be part of that population…

How Bad is Fundamental Literacy in America?

Remember those studies about literacy that started in 1994? In 2012 the Program for the International Assessment of Adult Competencies or PIAAC was conducted in 40 industrialized countries as a large-scale study to determine the cognitive and workplace skills that adults need to function properly in society and in a global economy. It included a minimum of 5,000 participants in each country and, when the survey was repeated in 2014 and 2017, also included employed/unemployed adults, incarcerated adults, and the elderly. The test itself was scored from 0 to 500, with 275 and above being the minimum level needed to function well at work and in daily living. It was Epic.

And how did we do?

To my great chagrin, adults in the United States scored an almost-there-but-not-quite 271 in literacy and an embarrassing 255 in numeracy. In comparison with the other 40 countries, we performed slightly above average for literacy. ::shrugs shoulders::.

If that seems like a low bar to you, it is. The average American is below the minimum level to be considered a properly functioning member of a society. And those scores generally peak at the age of 30.

No wonder we are having so much trouble keeping up with the rest of the industrialized world, much less keeping up with our own health. Remember how Americans compare in regard to lifespan?

4 Reasons why this all matters

There has been study after study, after study which all point to the same thing. Poor health literacy leads to huge consequences. This is across the board, no matter what aspect of health you look at, what age you are, or what level of schooling.

Barriers to comprehension can apply even to those without limited literacy.

Awesome. Now that we understand the problem and how vast it is we can talk about how fix it. In my next article, I discuss what public health officials are currently doing to help turn this ship around, as well as what you can do, as an individual, to improve your own health literacy.

Until then, I wish you deep breaths and gentle hugs,