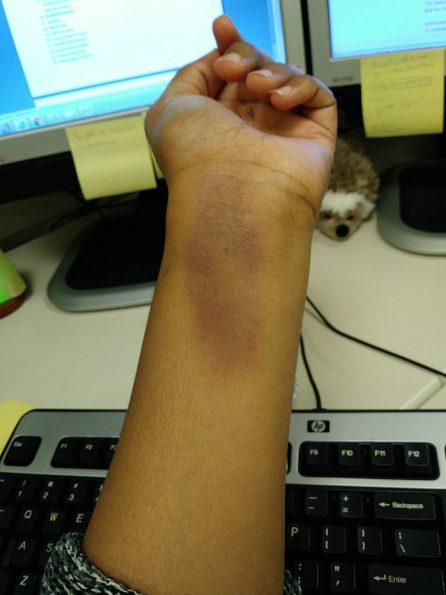 I had to stop the birth control pill. My doc and I discovered that was causing a hormonal I’m balance and killing my poor cells.

My GYN didn’t have an explanation, but he seemed to be pleased with how much better I did. Unfortunately, after a couple of months off the pill, my endometriosis reared it’s ugly head. My cramps grew stronger, I bled more and I could barely move from the pain. My ovarian pain and bowel pain were growing to be too much and so my GYN suggested another solution: the IUD.

I made an appointment to get the IUD inserted for the first few days of my next period, so it’d :be a little easier. Bullshit.

I went in for my appointment and I was very apprehensive about the whole deal. You see, I’ve had an IUD in the past, and it was a DISASTER. Go grab a snack, this story is a doozy. I’ll wait.

The procedure from Hell

My GYN at some point in life about 6 years ago suggested I get a Mirena. For reason’s I can’t quite grasp right now, I agreed. I showed up about a week later for the insertion and the pain was more than I could bear. I cried out and screamed. Only the heavens know how I didn’t go into complete shock. I had to get a wheelchair to leave because walking wasn’t an option.

Fast forward 10 months and one day I felt TERRIBLE at work. My co-workers kept commenting on how green I looked, which is quite the accomplishment. I went home feeling sick and nauseous and like I was dying. The next morning, however, brought the best of it. I went to pee and my IUD. fell. out. It came out in this cocoon of flesh and tissue and I just about fainted. Luckily my ex-boyfriend was there to bravely scoop it out of the John and put it in a baggie. He then promptly took me to the hospital.

Luckily I was fine, but, I lost my IUD. It was ok though, my boyfriend and I had broken up by the time it fell out, so it was almost symbolic. Like my body was like “you won’t be needing THIS anymore!”

Back to the present day

I understandably (duh) declined another IUD. Getting another of those was so off my radar I forgot they even to my GYN for another IUD because for my endo, there aren’t many choices left. I obviously can’t take the mini pill and I still off and on use the estrogen cream, a low dose progesterone IUD is likely my best shot as a mostly normal life. Unfortunately the in-office insertion was WAY too painful (even with the cervical block injection) so I had to do it in the hospital.

Everything with me ends up being dramatic, wtf

It was a whole shebang and I ended up waking up screaming in pain. Color me surprised. I existed in pretty much constant pain for about 2-3 weeks and have taken WAY too much Tylenol, but I have survived to tell the tale. I still get awful cramps from time to time, but fortunately, 5 weeks later, I’m holding strong.

Funny realization I had however was that the pain would get exponentially worse at the same point in time everyday. We all have an inner clock in our guts that we rarely take notice of. it’s kinda like how you poop around the same time everyday (if you have a normal-ish gut). It was an interesting discovery to me to know when my gut wakes up for the day. it’s a lot later in the day than I thought lol. Apparently my stomach likes to sleep in, just like me! I’m so proud.

An extensive update, I know, but I felt it necessary. I happen to have a very sensitive cervix and that is OK, it is normal. Painful as hell, yes. Abnormal? No.

Wish me luck that it stays in this time. I think I have years of life to give up to get another one. Also, I have vowed to have less pain this year. Can that be a New Year’s resolution?

Do you have any IUD battle scars? I’d love to hear from fellow IUD warriors.

Wishing you gentle hugs and lots of light,