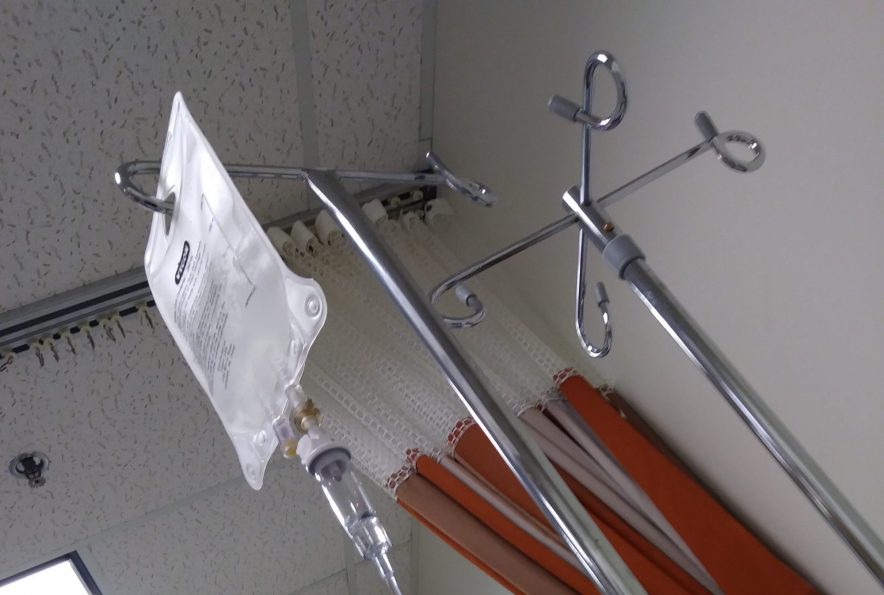 I  realized I missed my infusion TWO WEEKS after I missed it. Genious.

I have been receiving Actemra infusions for about a year now to treat my Lupus/RA symptoms. It’s kinda awful and I want to switch back to Azathioprine.

To give you some background, when I was first diagnosed it was because I suffered an incidence of ischemic bowel. Ischemic bowel is when there is some kind of blood flow blockage to part of the intestines. It is very painful and bloody and thankfully I didn’t lose any intestine at the time.

After some extensive blood work, it was discovered that I had some variant of an autoimmune disorder(very positive ANA-titer) PLUS Antiphospholipid Syndrome. I was then sent off to a rheumatologist that triggered the great search for my perfect drug cocktail.

My last infusion was scheduled for the day before my hubby’s birthday and in the runaround of getting him something, I forgot about my appointment. I think back to that day and what I was doing instead of getting my infusion was buying shoes for him as a gift. Gah. At least they are nice shoes, and he loves them.

After I finished beating myself up for forgetting, I called to make an appointment and unfortunately, they were completely booked up for another 2 weeks.  I said I’d call back, forgot AGAIN, and then remembered again, called and had to wait another two weeks. That means I waited for a MONTH to get it.

I remembered I missed it because I started to feel like absolute crap: my joints started to hurt, my body hurt, my fibromyalgia was kicking in, my plantar fasciitis was acting up. Sigh.

I’m mad I missed but but don’t mind TOO much.

Part of me still holds on to the hope that the doctors are wrong, that nothing is wrong with me and that I’m taking all of these medications for no reason. I still, somewhere deep, imagine one day that I stop my medications and find that I never needed them after all, that I’m ok and my body doesn’t want to hurt itself. I like to dream that I’m normal.

Back to reality and I’m sitting here with this damn pump beeping in my ear. The IV line was easy to get in this time, thankfully. The rubber tourniquet they use to stop the blood flow is SO PAINFUL. The last time I had bloodwork done I almost cried from how much the damn rubber band hurt. The nurse looked at me like I was crazy and then, of course, continued to fish for the vein. The nice nurse isn’t here today. :/

The quest for the right drug

Plaquenil (aka hydroxychloroquine), on its own, helped at first, for the first year or so, but it wasn’t enough. My rheumy then added methotrexate to the mix which, ultimately, had done TOO good a job. For anyone who is not aware, methotrexate is a chemotherapy/immune-suppressing drug.

In high doses, this will kill most fast-growing cells in the body and cause some nasty side-effects such as hair loss, mouth sores, nausea,  liver damage, just to name a few. When taking lower doses, it can work to suppress an immune system and therefore slow down any autoimmune attacks. Unfortunately, even at the lowest dose, I found myself admitted to the hospital with a 104.5 fever. It killed my poor little white cells and a simple sore throat turned into an open sore on my tonsil. Also I had a yeast infection for 8 MONTHS.

No bueno. So I got off methotrexate and Azathioprine was put up to bat. It worked well enough, but when my INR wouldn’t go past 1.3 no matter how much coumadin I took, we realized it was interfering with the coumadin. I cant stop Coumadin because its preventing my body from creating blood clots I have Antiphospholipid Syndrome). Poop. Now let’s try a biologic: Orencia.

The next frontier: Biologics

Orencia didn’t help me, unfortunately. My joints were doing really badly on it and my ESR markers kept rising. I just wasn’t doing well, so Actemra, is up next!

Actemra is working for me and helps me feel more normal, but the fact that it is an infusion just doesn’t sit right with me. I applied to get the individual injections but my insurance never approved it. Fortunately, I recently switched from Coumadin to Xarelto so I can start Azathioprine again!

I want to see if the Azathioprine will cause yeast infections again. I honestly don’t remember if it did or not, but let’s see! It might be a game-changer if I can stop with the infusions. I’m REALLY hopeful about it and if I never have to come back to this cramped room with an IV stuck in my arm for an hour +, I’d be delighted.

I will bring it up at my next rheumy appointment in September.

(Pro Tip update: I learned just yesterday that you can request that the BP cuff be used to take blood instead of the tourniquet. I will try it next time I go in and I will let you know!)