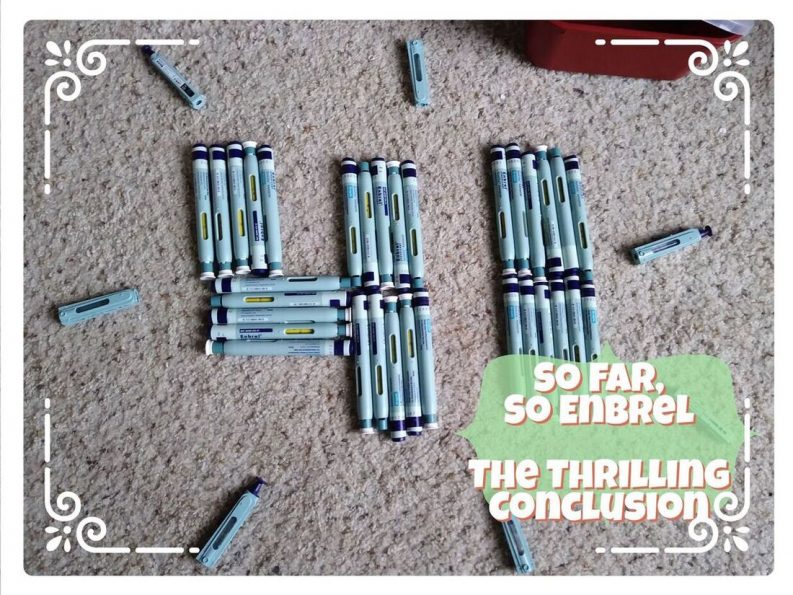 Here I will be picking up where I left off in So far, so Enbrel Part I. In part 1 I discussed Enbrel’s “mechanism of action” or how it works and now I will discuss how well Enbrel works.

After all the research, I felt pretty good about what I understood about Enbrel: it was engineered to be super sexy and attract excess TNF so the TNF would stop attacking my butt joints. Plus my other joints too. In a nutshell.

Couple this idea with the Ebrel commercials that all but promise remission and I’m left with the impression that I would eventually no longer feel pain. But, by what metric are we measuring “less pain”? What is Enbrel selling us, and is it as effective as it is made out to be?

Personally, I have been taking Enbrel for the better part of a year at this point. (See image above) Sure, I feel better, but my quality of life still isn’t where I’d like it to be. In fact, I have less SI pain, but I now have increasing pain/weakness in my hips, knees, and hands.

My AS is (mostly) under control, my RA is not

These are complications that I did not have before. In fact, I am starting to have trouble dressing myself. I have difficulty doing day to day ADL (activities of daily living) such as washing the dishes, or lifting my Brita pitcher. I still can’t walk long distances. In some ways, my disease is progressing.

This led me to start scouring for some research on Enbrel’s website itself. I wanted to see the clinical trial data on it’s efficacy (how effective it is) and longevity (how long it lasts). I also wanted to find some independent trials on Enbrel. There is a little thing called conflict of interest that can come up once or twice when speaking of drug trials.

On to the science

For this section I will focus on RA since it is more common. I will also be pulling excerpts and data from the “Medical Professional” side of their site. I am doing so because the patient site is woefully watered down. I’m assuming this is to make the science more digestible to the general public, however, it just seems shady to me. Maybe that is just me.

After scrambling over to the medical professional side of Enbrel.com I found 3 prominent clinical studies front and center. I patted myself on the back for finding some real data and then noted something interesting.

All three studies focused on the effectiveness of Enbrel in conjunction with “MTX”, which is Methotrexate. (My old friend)

This brought up an interesting revelation: Enbrel appears to be more of a booster to current therapy, specifically with MTX. There are some fine-print style mentions on the site that Enbrel “can be used with MTX or alone” but it appears that combining them together is the ideal treatment. The graph below highlights the percentage of patients who achieve DAS 28 (Disease Activity Score) remission on MTX alone versus Enbrel +MTX.

These studies are like giving me a cup of diced oranges and peaches mixed together and a second cup of just diced peaches. After I eat from both cups you ask me how good the orange tastes. How the hell am I supposed to know? Give me a cup with oranges ONLY.

On to more research!

I’m not saying Enbrel doesn’t work on it’s own, but how much so is unclear. The next step in my research was to find a study on Enbrel’s effectiveness ALONE or against other therapies. Clinical trial drugs have to do just as well or better than currently approved drugs in order to be approved by the FDA, so show me the money.

When it comes to getting data on drug research, CinicalTrials.gov is king. It is a “registry and results database of publicly and privately supported clinical studies of human participants conducted around the world. And I found what I was looking for!

For the sake of this article not taking 3 days to read, I will only highlight two studies. The first is Moderate Rheumatoid Arthritis (RA) With Etanercept (Enbrel). Pretty straight forward name, I guess.

This study had 2 “arms”, or groups. The first group was given a placebo for 12 weeks and then switched to Enbrel injections for the last 12 weeks of the study. The second group was given Enbrel for the full 24 weeks. Both groups continued their other “disease modifying anti-rheumatic drug” or DMARD therapy. DMARDS are immunosuppressive and immunomodulatory drugs like MTX, plaquenil, sulfasalzine, etc.

The study concluded that low disease activity was achieved by more Enbrel patients, but the difference was “not statistically different at week 12”. It’s a short-ish span of time, but it leads me to again conclude that Enbrel is more of a cocktail drug. Aso (side note) it’s a little fascinating how effective the placebo was on it’s own. If you are interested, you can check out the published story here on PubMed.

The second study I will bring up is: CAMEO: Canadian Methotrexate and Etanercept Outcome . This study also had two arms but did the opposite of the study above. Both groups were taking MTX and Enbrel for 6 months, then half of them were tapered off MTX. The other group continued the Enbrel/ MTX combo. They were all followed for another 18 months.

So what did they find? In patients who weren’t originally responding to MTX alone, they did better on the combo of MTX and Enbrel, than on just Enbrel alone. In fact, patients with high to moderate disease activity (MHDA) worsened on just Enbrel alone. Another interesting find was that patients who achieved low disease activity (LDA) on the combo, regressed in progress after 6 months, regardless if they stopped the Enbrel or continued on the combo. Feel free to check the PubMed documentation out here if you want more info.

Forty one weeks on Enbrel and I am not at all surprised with the findings of my research. Enbrel to me is truly what I would call a “booster drug”. It works best in a cocktail with other drugs and bumps their efficiency. This doesn’t make it bad, it just isn’t strong enough alone. (Of course there are people for that this doesn’t apply, but count your lucky stars if it doesn’t)

Unfortunately, as a patient who has failed 6 different drugs including MTX, I have very few options left to add to my therapy. Knowing what I know now, if I hadn’t noted improvement after 12 weeks on Enbrel, I would have been more adamant with my rheumy about discussing additional drug options to add to my therapy. I didn’t do so sooner because I figured the Enbrel just needed more time to work. I wasn’t well informed enough to make a better decision.

What did end up happening is I waited 24 weeks to talk to my rheumy about my worsening symptoms. After failing sulfazalazine in May (I will post about that disaster as well) I have just started Azathiopine (Imuran) again. Just to be clear, I initially failed Imuran due to recurrent yeast infections but I’m desperate for relief so here we are.

I kid..hopefully. What I would like to expect is once I am on the full dose of Imuran is that the Enbrel will give the it the boost that I need to finally feel better. Let’s make a study on that.

Are there any medications you would l like me to look into? I already have a list that includes most DMARDS and a couple biologics but I can always add more. Do you have a similar relationship to medications as I do? Or conflicting stories? I’d love to hear from you in the comments!